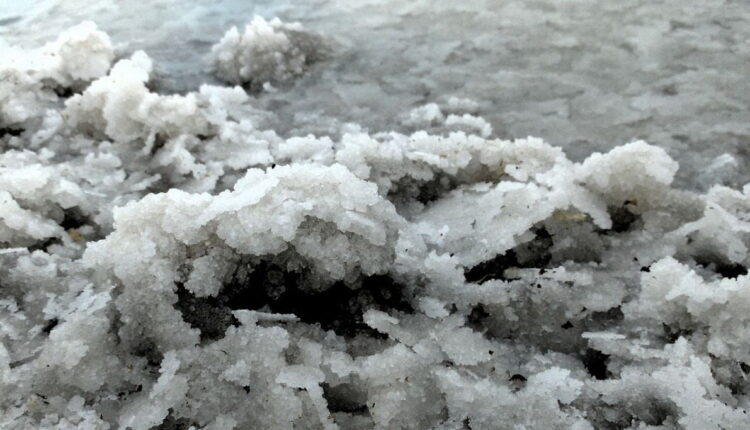 Do you belong to the 80% who are magnesium-deficient?

80% is a huge part of the population, so chances are that you, too, are not getting enough magnesium (Mg) in your food.

Why would that be a big deal, you ask? Well, only because Mg is much more essential to health than most people know. Did you know that not one of your cells can function without Mg?! Mg is needed for converting food into the physical energy that drives cell processes such as muscle contraction and relaxation, nerve pulse transmission and synthesis of biochemical molecules. According to Oregon State University’s Linus Pauling Institute, Mg is a cofactor in more than 300 biochemical reactions, which means that magnesium is basically involved in all metabolic pathways.

In short: no Mg, no life. Deficient Mg, deficient life. And by “deficient life” I mean living with symptoms that range from mildly annoying to life-threatening!

Magnesium is essential for all muscles

Mg is needed to convert nutrients into ATP (adenosine triphosphate), the energy molecule that drives the processes within living cells. It is also involved in the synthesis of over 300 enzymes that regulate the energy balance. This means that Mg deficiency could well be to blame for feeling chronically fatigued.

Mg is essential for the normal working of muscles, not only controlling their contracting action but especially to return them to relaxation. Thus, insufficient Mg will cause cramps. I have known for years that calf cramps are due to lacking Mg. But I had no idea that subclinical Mg deficiency is “a principal driver of cardiovascular disease”, as a recent study concluded (DiNicolantonio, O’Keefe & Wilson, 2018). It makes sense, though. Your heart is your most important muscle, after all. And so it’s not just legs, but especially the heart with its unending rhythm of contracting and relaxing that desperately needs Mg for this heart rate function to continue without hiccups. Mg is also involved in regulating blood pressure (by relaxing the muscle cells that constrict veins) and blood sugar.

Another important set of muscles we probably don’t think about much is that tasked with bowel function. Mg is very important for bowel regulation. Not only does it draw water into the bowels, it also stimulates the “waves” of muscle contractions (peristalsis) that keeps your digestion moving. Without enough magnesium, the digestive matter will be dry and stiff, and peristalsis will be sub-optimal, which means the whole process is slowed down. This, in turn, means constipation, which in turn causes reabsorption of toxins as they remain in the body longer than they should. Mg-sulfate is commonly used to treat the symptom of constipation (though less the cause of Mg-deficiency).

One of the results can be PMS, which is partly due to estrogen on its way out being reabsorbed through the intestinal walls, creating an estrogen excess.

A third set of important muscles is that of the breathing system. Our airways must expand to take in air. When Mg is deficient here, asthma may result. Asthma, after all, is the inability of the bronchia to dilate, one reason for this being spasm of the musles surrounding the airways. Mg-sulfate is therefore also used by doctors as a bronchodilator for people with severe asthma flare-ups.

In pregnancy, eclampsia and premature labour often have the same cause and are thus also treated with Mg sulfate.

Magnesium is essential for all nerve action

Next, the normal working of the nervous system cannot happen without Mg. Mg has been referred to as the fifth but forgotten electrolyte. Electrolytes are mineral ions that conduct electricity when mixed in fluids. They are needed to regulate many bodily functions and must be kept in balance.

When there is a lack of Mg there will be problems not just with muscle action, but also in the working of the brain, as well as the brain’s communication with the rest of the body including the organs.

Sleep disturbance can be caused by neurological problems that are due to lack of Mg.

Since the immaterial psyche is physically rooted in the brain, Mg deficiency can also result in psychological problems, such as depression. Wavering moods, brain fog, attention problems and anxiety may seem like distinct conditions, but they do have a common thread: They signal that the mitochondria (the structures that make ATP to power your cells) in your brain cells are struggling. Again, it’s the availability and balance of magnesium that determines how much energy your mitochondria make. The amount of energy in your brain determines how clearly you think, how intensely you can focus, how calm or anxious you feel, how happy you feel and how you respond to stress.

Magnesium is essential for the synthesis of biochemicals and more

Besides its importance in ATP sythesis, Mg is also essential to synthesizing proteins. These include collagen and elastan, which are the main components of all connective tissues throughout the entire body.

Not only is Mg an essential cofactor in almost all enzymatic systems involved in DNA processing, it also has a stabilizing effect on DNA. Part of this stabilizing occurs through Mg’s helping with the removal of DNA damage generated by environmental mutagens and other factors.

Hormones (including testosterone and estrogen) are also some of the biochemicals in the synthesis of which Mg is involved.

We all know how important calcium is for strong bones and strong teeth. It’s less well known that Mg, too, is important as a structural component in both teeth and bones. It has an important role in calcium metabolism (improving how calcium is used), as well as in bone matrix formation. Since Mg maintains bone elasticity, Mg deficiency promotes brittle bones and ostheoporosis.

Mg regulates the metabolism of calcium, and as such inhibits pathological calcification, which means that Mg deficiency can contribute to arteriosclerosis (calcification of blood vessels), the formation of calcium kidney stones (kidney disease), or calcification in the liver, the heart or muscle tissue. Too much calcium with too little Mg is also a factor in blood clots (whether they obstruct blood flow in legs, in the heart or in the brain), cataract, dementia, asthma and decreased glucose uptake.

Mg is even crucial to liver health, as it is needed for liver detox to work properly. It also supports adrenal function, as well as being involved in proper thyroid function. and otherwise supports the immune system.

Since Mg is needed for so many processes to work smoothly, Mg deficiency is obviously detrimental to health. In fact, Mg deficiency will create pro-inflammatory conditions wherever it occurs. And constant inflammation in the body is a factor in the development of many chronic diseases, including auto-immune diseases.

What are the symptoms of magnesium deficiency?

Because of the very fact that Mg is involved in so many seemingly unrelated body processes, a lack here or a lack there can result in completely different symptoms. In fact, hypomagnesemia can look like a lot of other conditions. Look back at all the areas where Mg is essential and see the correlations with the following symptoms:

How does magnesium deficiency come about?

Normally we should get all the Mg we need from our food. Mg as a chlorophyll component is very important to photosynthesis and plant growth, and so all green plants naturally contain Mg. The best food sources for Mg are dark leafy greens (spinach, swiss chard), legumes (soy beans, kidney beans), nuts (cashews, almonds), seeds (pumpkin, sunflower), whole grains, berries, fish (halibut) and seafoods. Even dark chocolate contains a good amount of Mg. Milk and meats contain moderate levels.

However, the importance of Mg in soil and ultimately crop production has often been overlooked, so much so that Mg has been neglected in fertilization practices. This means that Mg is likely to be deficient in soils used in intensive crop production systems. Which in turn means that food that is produced from those crops will also be Mg-deficient (AgroCares). While diets used to contain calcium and magnesium in the ration of 1:1, today you can find ratios of between 5:1 and 15:1.

Processing further removes Mg from food. For example, the process involved in refining grains removes over 80% of the Mg, while refining sugar removes all of it.

Then there are factors such as vitamin D deficiency (which is also prevalent in the West), aging, pregnancy, stress, alcohol consumption, caffeine, smoking, diets (high protein, high fat, high sugar), toxins (fluorides in water and tooth paste, aluminum), medicines (such as female hormones, acetaminophen/paracetamol, proton pump inhibitors and antacids, antihistamines, blood pressure drugs, diuretics and antibiotics), or certain medical conditions (such as diarrhea, celiac disease, hyperthyroidism irritable bowel syndrome) that either cause magnesium in the body to be depleted or else hinder the absorption of Mg from food.

However, the latter are rare, because in times of low Mg intake the kidneys’ regulation system will hold onto Mg, rather than excrete any.

What is a subclinical deficiency and why is it hardly ever dianosed?

When talking about nutrient deficiencies one must distinguish between those that are called “frank” or “overt” (the deficiency is so great there are obvious symptoms, such as scurvy from vitamin C deficiency) and those that are called “subclinical” (the deficiency is low-grade and causes reductions in physiological, cellular and/or biochemical functions that are not readily apparent). The longer such functional reductions go on for, the greater the risk that you will end up with any one or more of numerous chronic diseases. Since these functional reductions are “clinically silent” (meaning it’s hard to diagnose them for lack of obvious symptoms), they often do go on unrecognized for long periods of time.

Mg-deficiency (in medical jargon, “hypomagnesemia”) is definitely of the subclinical – and therefore hardly ever diagnosed – type.

The reason blood tests do not reveal subclinical Mg deficiency is firstly that most doctors do not even check Mg levels. Secondly, when they do check, they look at the blood’s Mg levels. Yet, only 1% of the body’s overall magnesium stores are kept in the blood circulation, whereas 99% are in the cells (53% in the bones and 46% in the soft tissues). The blood’s Mg content is kept constant by pulling Mg from other parts of the body when needed. Therefore blood tests can say nothing about the real amount of Mg in your body – which apparently should be about 25g (DiNicolantonio et al, 2018).

Unfortunately, “The evidence in the literature suggests that subclinical magnesium deficiency is rampant and one of the leading causes of chronic diseases including cardiovascular disease and early mortality around the globe, and should be considered a public health crisis” (DiNicolantonio et al, 2018).

And so Mg deficiency could be the source of your troubles, without you or your doctor realizing it. Think about it: If you haven’t had to “go” in three days, you’re snapping at your kids and you keep losing your car keys, would you think that all of those trace back to the same thing — let alone low magnesium?